It all started with the Yuna (literally, “bathhouse women”).
This geiko culture in Arima Onsen, Japan's oldest hot spring,
is the only one of its kind left in Hyogo Prefecture Geikos were born as yunas,
and passed down many traditional arts such as dancing, nagauta, kouta,
and hayashi, making history even today.

The History of
Arima’s
Geikos

In the past, people in Arima called those who take care of the guests of the hot spring “yuna.”
In 1883, when the bathhouse was rebuilt in a Western-style building,
the term "yuna" was abolished, and a yuna became a "geiko".
Geishas in hot spring resorts all over Japan are said to be originated from yunas,
and Arima is the oldest hot spring resort in Japan with there are many historical records about it.
After the Great Keicho-Fushimi Earthquake of 1596 which destroyed Arima Onsen,
Toyotomi Hideyoshi gave stipends to the yunas as a measure for reconstruction.
This continued until the third generation of the Tokugawa family.
They acted like that of national civil servants of today.
In the middle of the Edo period, when people were free to come and go as they pleased,
travel books introducing Arima were published, and the area became known as "Arima Senken.”
At that time, ukiyo-e paintings of bathhouse girls became popular as souvenirs.
They are said to have been like modern stars.
Although the word yuna first appeared in historical documents
in Arima in the Muromachi period (1336-1573),
there is a possibility that the word existed before that.
There is also a theory that it stems from “Yuina,” the name of the person
who manages the bathhouse of the temple and of the dancer
who would liven up the place when the festival is to be decided by divination in the Heian period.
Both may have been related to Arima,
given that Arima has been a hot spring resort for emperors since the Nara period. 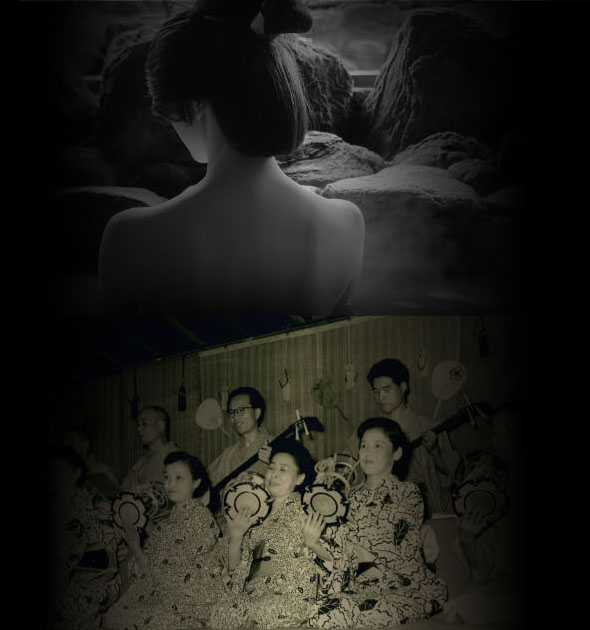 Arima Kenban is the union that organizes okiyas,
which is like an office where geikos belong to.
At present, the Arima Kenban is the only one of its kind remaining in Hyogo Prefecture.
In the past, there were 15 okiyas in Arima Onsen,
but the number decreased after the Great Hanshin Earthquake.
Today, Tanaka-seki is the last of them,
and it is called "Arima Kenban, Tanaka-seki."
Arima Kenban and Tanaka-seki is run by Hinayo,
an active geiko, and all the active geiko in Arima belong to it.
To preserve the historic geiko culture for future generations,
they devote themselves to the practice of traditional arts such as Japanese dance,
nagauta, kouta, and hayashi (taiko, tsuzumi, and otsumi).
In 2015, the first floor of Arima Kenban was renovated into a café-bar
with a permanent stage and opened as Geiko Cafe Ito.
With active geikos stationed there,
many tourists, including families, couples, and foreigners,
visit the cafe as a place where they can enjoy geiko dances
and ozashiki-asobi (“tatami-room games”),
which once seemed to have a hard barrier of entry. 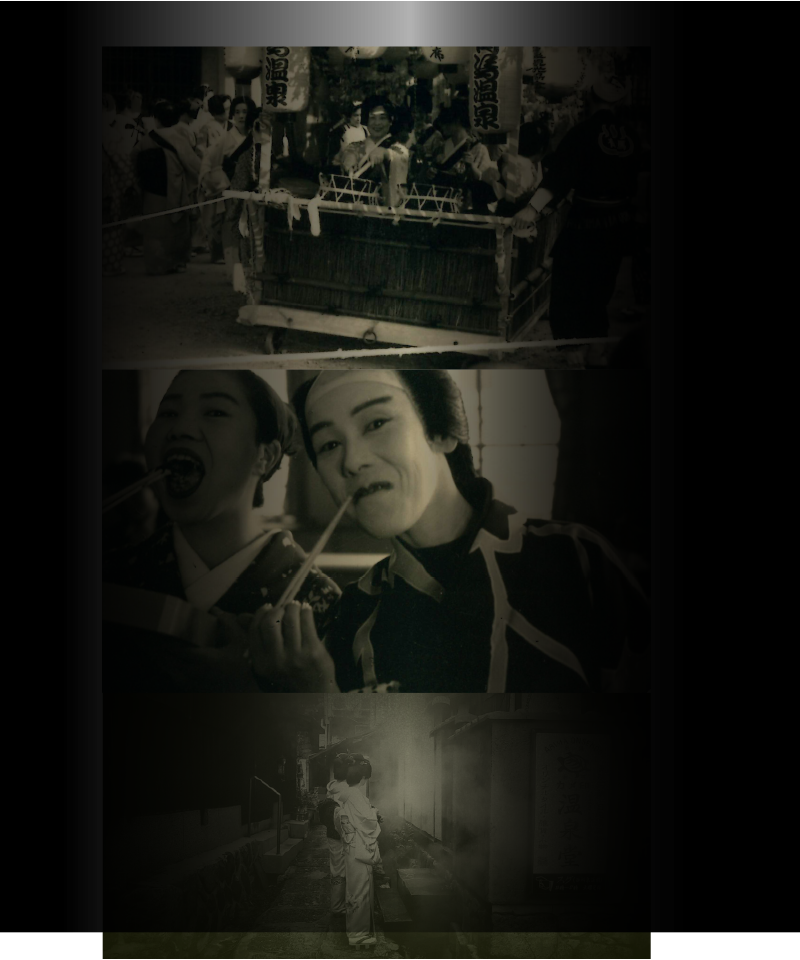 Geiko Cafe Ito is a place where you can experience the dances
and ozashiki-asobi from Arima’s geikos.
Enjoy a moment of elegance while sipping tea or sake.
In 2015, the first floor of Arima Kenban was renovated into a café-bar
with a permanent stage and opened as Geiko Cafe Ito.
The cafe has been visited by many tourists as a place
where they can enjoy geiko dances and ozashiki-asobi,
which once seemed to have a hard barrier of entry. 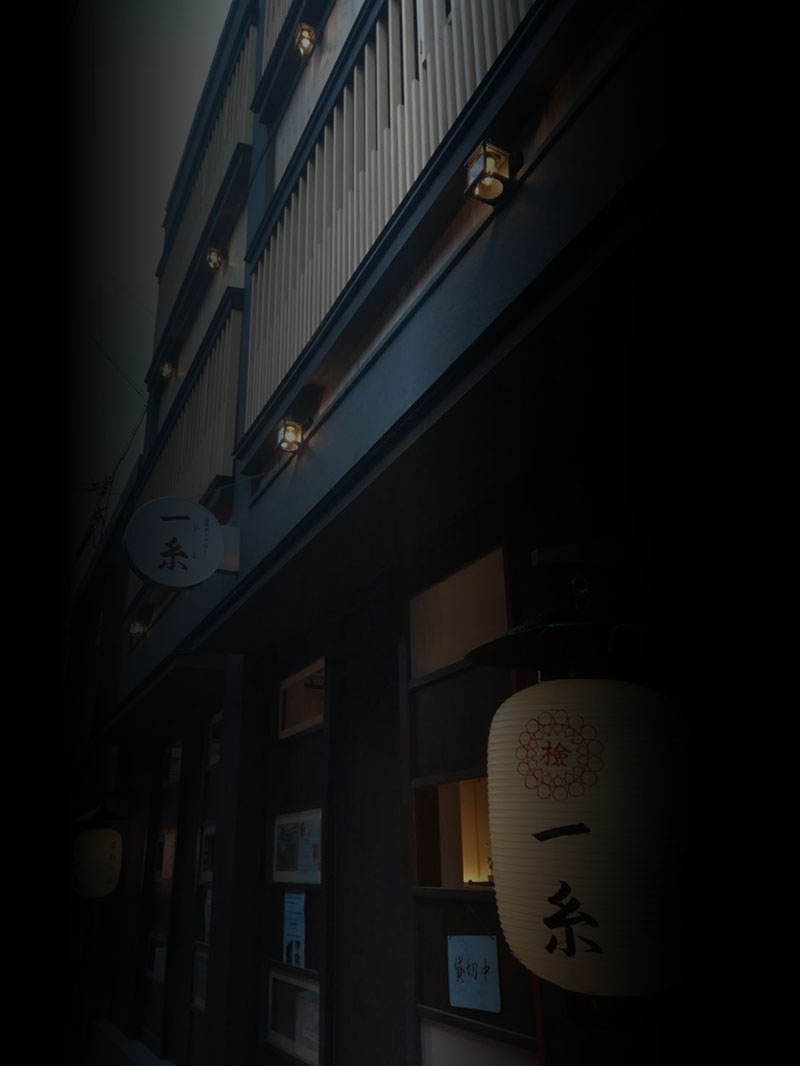 Until now, the geiko culture of Arima Onsen has been supported by demands for corporate entertainment and banquets,
but these demands are now on the decline. Conversely, demands from families, couples,
and foreigners are on the rise in Arima Onsen,
and it is important for the geiko culture to address these new customer segments.
Therefore, the new Zoom Geiko will focus on the needs of couples,
families, and foreigners while being structured around more specific user scenarios,
such as the Birthday Course for couples celebrating birthdays,
or the Celebration Course for families celebrating their relative’s 60th birthday.
In addition, we have shortened the length of each tatami room session from two hours to one and a half hours,
with an emphasis on congratulatory words, dances, and shamisen.

In the Birthday Course for couples, after celebrating with a birthday song via singing and shamisen,
the geiko, who is a love expert,
will help the couple to deepen their relationship by directing the conversation such that their feelings for each other,
which is not usually expressed, are brought to the surface. Afterward,
the geiko will perform Iwai Medeta, a congratulatory song, and Haru wa Ureshiya,
a song of spring and happiness, to wish the couple a long and happy life together.


In the Celebration Course for families,
the geisha will give a congratulatory greeting
and then wish you longevity with songs and dances such as Tsurukame.